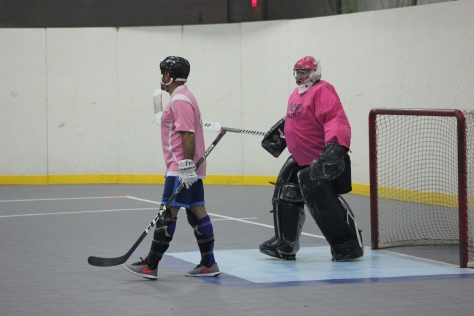 Despite getting on board first, Carnage dropped a goose egg giving up the next five tallies just short of the mid way point of the game. Clearly they weren't themselves making things extremely easy the Knights. For the majority of the game, the Knights were dominant in every facet. Goals came-from five different players up until C.Moutafis went on a scoring rampage posting three in a row to finish his night with an impressive four goals. Carnage had some good looks-from M.Pace, who buried a pair, and D.Xiarchos that was able to participate in all four markers.

Throughout most of the game, Fat Roy had a difficult time keeping up with the Left Wings. It's not that they were out of it but often stuck having to playing-from behind. Two small minutes in the first period was all it took for the Left Wings to create a two goal margin. They struck three times during that span and never looked back despite plenty of hockey left over. M.Morin notched back to back tallies at key moments sharing a multi goal night with J.Argyropoulos. Even though it's early in the season, teams will realise quickly that the Left Wings will be difficult to beat.

The Buckshots looked to be dead in the water when the Mighty Drunks used three late goals to grab a 6-4 lead. And in most circumstances, that would have been more than enough, especially with the clock showing only 53 seconds on the board. Then the drama began and the Mighty Drunks were left shell shocked giving up giving up two quick goals that forced overtime. Unable to shake off the nightmare finsih, things only got worse for the Mighty Drunks. Twelve seconds was all it took for E.Mavroudis to put an end to the misery. K.Kavan was vital for the win accumulating five points including a big assist in overtime. The Mighty Drunks played well enough for a very long stretch relying on balance scoring. Luckily it's only the start of the season as they'll have plenty of time to put this one behind them.

The SalumiVino player of the night goes to Kevin Kavan of the Buckshots. Most of the Buckshot's plays stemmed-from K.Kavan, who was a dominant force collecting five points.

A.Desrosiers relished a magical night as Wocafloca beat United thanks to his latest goal spree. All three goals came-from their top gun with two coming on the power play. For over two periods, the United couldnt break through trying to solve C.Stravriadis, but that all changed by the third period when G.Jerjian solved him twice. United narrowed the gap to one on two occasions. The problem was that there second goal came a little too late leaving only a minute and a half for an equaliser .Overall, the Wocafloka used a better start to their advantage in order to edge out their opponent.

The Horsemen looked soundly beaten down 3-1 in the third period Sunday night, but a five goal explosion over the final eleven minutes of the game catapulted the Horsemen to a convincing 6-3 win over the Knights. V.Pandza was the first to lead the way netting his second to pull his club within one. Then, once D.Greco set up J-K Cazeneuve for the equaliser, D.Greco took it upon himself to bury the next two tallies in a very short period of time. The Knights appeared to have enough control throughout most of the night. J.DeSua scored twice while S.Ruggiero provided a two goal cushion early in the third period. Unfortunately, they couldn't ride a formula that was working just fine long enough.

The SalumiVino player of the night goes to Alex Desrosiers of the Wocafloka. Single handedly, A.Desrosiers ignited the offense bagging all three goals versus United.