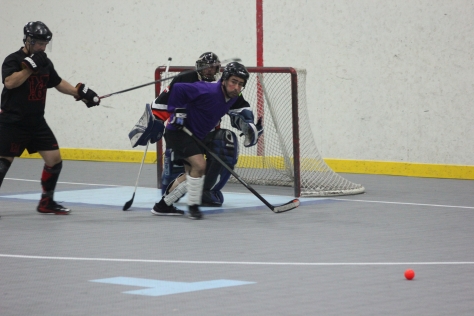 S.Laplante used a blistering slap shot to snap a 3-3 third period tie, and National were able to squeak out a hard fought victory versus the Brewers. Top their credit,the Brewers were able to keep pace with a quicker opponent which isn't an easy task. And although they stumbled in the end, the spunk the team exhibited in this game was a step in the right direction. There was no doubt that M.Pinheiro had his foot print in the victory. The captain scored his clubs two first goals while setting up S.Laplante for the winner.

Pylons pull away in third period to top Family

The score may suggest an easy game for the Pylons, but it's far-from being the case. This contest took one direction as of the eight minute mark of the third period where the Pylons found a way to separate themselves-from their opponent. Prior to that moment, the game was up for grabs. J.Pizzucco set the tone early riffling two straight goals and eventually notched his third late in the game for a hat trick. D.Charbonneau and T.Settino also chipped in with a pair each for the win while N.Addesa did the same but in a losing cause.

By the time the first period ended, the writing was already on the wall for the Bramabulls. Trying to overcome a 4-0 deficit against a team that prides themselves on defence was too much of a tall order to overcome. The Templars didn't stop there adding two more in the second period with still no response -from the Bramabulls. Eventually, they did get to C.Muccino, who did more than his part keeping a clean scoresheet. C.Pirone and S.Fabrici provided half the offense for the Templars as both players shared two goals each as defensemen.

The SalumiVino player of the night goes to Steve Laplante of National. With the game entering its dying moments, the crafty defenseman was able to decide it on a bullet-from the point.