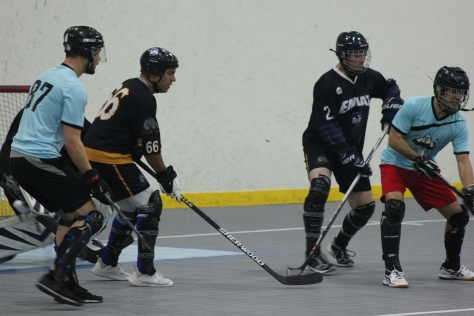 After a close first period, the Armadillos turned the corner by the second striking four times to hand the Ice Breakers a 5-2loss.They never let off the gas-from that point on which translated early on in the ensuing match. K.Koutsogiannopoulos and G.Bouchard had two goals each and F.Moshonos allowed a total of only three goals on 31 shots. The Ice Breakers saw H.Jerjian contribute again posting two out of his clubs three goals.

F.Baratta solid in net as Legacy down Venom

F.Baratta entered the night expecting nothing but a pair of wins and didn't hesitate to deliver. Baratta made 14 saves in the first game followed with a jaw dropping performance in the second match where Legacy toppled Venom by a landslide. The game could have been much closer if it wasn't for Baratta flashing his leather on a few occasions. And since goaltending wasn't a concern, the offense slowly fell into play for Legacy. J.Rochon, looking utterly sure of himself and utterly fearless keeps doing what he does best, and that is to score goals. The power forward celebrated four tallies while collecting three assists in both games. In addition to his madness, K.Koutsogiannopoulos had an influence as well using his devastating slap shot three times to beat the opposing net minder.

A late goal by A.Fonrose gave the Excalibur a 2-1 lead to help split their miniseries with the Chic Choc. Both games were evenly played-from the two teams. Surely, the Chic Choc would have preferred better knowing that they had only 75 seconds to reach a shootout. But a split could have been expected. J-P Morneau got credited the winner in the opening contest, and F.Peloquin frustrated every Excalibur player except for A.Fonrose, who beat him twice. The second match saw the tides turn, and in large part due to S.Sauk guarding his cage. After facing 18 shots, the net minder rebounded allowing only one goal to earn a big win in net.

The 1 Timer didn't bring enough good elements in order to compete with the Orient. The Orient was clearly superior in the first game, not only offensively but owning both ends of the court. T.Sakr led the way with a hat trick and C.Malkoun held his opponent to only two goals on 16 shots. Unhappy with the way things ended, the 1 Timer had a lot more urgency entering the second game. They managed to grab a 2-0 lead on two quick goals-from P-A Surprenant and J.Guye-Perrault. The problem however was that they couldn't carry their momentum long enough. Only two minutes had gone by for M.Morin to get his club on board. N.Zahabi would eventually tie it and the Orient slowly but surely started to take over. Their first lead came as of the seven minute mark of the final frame when J.Mavuanga collected one of his three points in the game. There wasn't much push back-from the 1 Timer until it was too late. By then, the damage was too great to overcome.

Usually teams aspire to win every game possible which is a basis expectation. And even though the Dragons had that same goal in mind, a split felt like a moral victory when considering how short they were. B.Daniele's third point in the opening game was just enough for the Dragons to squeeze out a close victory. The Degenerates did dictate much of the pace winning many loose balls while generating a ton of chances only to hit a hot net minder in P.Assadi. Eventually though, the constant applied pressure would get to the Dragons in the second encounter. In the span of only six minutes, the Degenerates cranked up their offense and unleashed it posting four straight markers. S.Marricco was an early spark plug bagging two in the first period. Then, A.Lanni took over igniting three straight tallies to put the game out of reach. It was clear by then that the Dragons had no more juice as they struggled to keep up.

The SalumiVino player of the night goes to Andrix Fonrose of the Excalibur. After collecting both goals in an earlier loss, A.Fonrose returned the favour by riffling a huge game winning marker that snapped a late 1-1 tie.