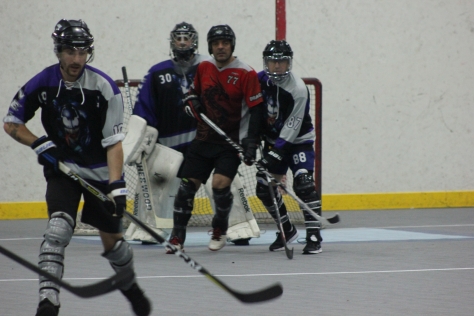 Chic Choc finish strong to draw even with Ice Breakers

The Chic Choc found a way to save their best for last. Their finest moments came in the last frame of the second encounter where the notched three consecutive goals to split their miniseries with the Ice Breakers. Prior to that game, M.Boghossian came through very late in the opening match to snap a 2-2 tie. Taking a lengthy penalty didn't help the Ice Breakers in the second match. The game was winding down when the Chic Choc were awarded a six minute power play opportunity. And despite so little time left over, the game was decided on two power play goals. Y.Belkassem buried his second for the go ahead marker and M.Ethier put the icing on the cake striking only seconds apart.

In both games versus the Dragons, the dynamic forward accumulated a ton of points that included two game winners. J.Mandracchia just keeps on ticking and even though the Dragons were aware of his mission on Monday night, there wasn't much they could have done to contain him. Both games were fairly close but Venom did find a way to get an edge. M.Trivisonno looked sharp and in control collecting a pair of clean victories between the pipes. The Dragons scored a total of six goals in the two games that saw P.Cardillo, A.Zarzour and G.DeMarinis riffle two tallies apiece.

Degenerates overcome late collapse to salvage their night in a shootout

After allowing the Excalibur to overcome a late two goal deficit in the second encounter, the Degenerates found themselves playing extra hockey. It wasn't there ideal finish, but they did manage to take it in the breakaways courtesy of T.Bergomi's lone shootout marker. T.Bergomi missed the first contest where the Excalibur had their way for most of the match en route to an easy 7-3 win. There was no doubt that his presence was felt as he played most of the game that resulted in two goals as a defenseman. The Excalibur pulled their net minder S.Sauk for an extra attacker in a necessary gamble that paid off. N.Katsifolis and M-E Julien came through in the final minute to even the score and force the extra time.

In their first game versus Legacy, the vast gulf of difference in quality between the two teams was apparent. Giving up five goals in only eight minutes was simply unacceptable for J.Kontitsis and the rest of the Armadillos. That vicious sequence took place as of the two minute mark of the contest where Legacy bombarded their opponent on efforts-from five different goal scorers. G.Panagiotopoulos didn't find the back of the net but was a part of making four goals happen. There was no doubt the Armadillos came out ready to play their second game. By addressing a more specific game plan, the adjustments were made for a much closer game. After trading two goals each in the first period, K.Kavan used a fairly late marker to put Legacy in front. Still, the Armadillos weren't calling it quits as a late desperate play resulted in an equalizer by T.Baltzis with only 3 seconds left on the clock. From-there, Legacy came out on top scoring twice in three shootout attempts. It is worth noting that P.Chiotis of Legacy shocked everyone in the building on a filthy shootout goal that probably nobody has ever seen.

The SalumiVino player of the night goes to Jonathan Mandracchia of Venom. The skilled forward was a force collecting six points in both games versus the Dragons that included two game winners.