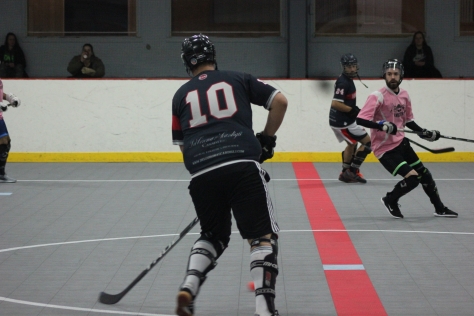 Carnage jump out early in rout of Mighty Drunks

Carnage set the tone early as they delivered with three straight goals to put an immediate strangle hold on the match. However, the Mighty Drunks did finish the frame strong on a pair of power play goals to pull themselves within one. Strangely enough, the second period was almost a carbon copy of the first as the same pattern repeated itself. After giving up three straight markers, M.Pinheiro gave the Mighty Drunks some hope by rattling off two consecutive goals to keep the game within reach. And even though they finished both frames strong, the third and final period belonged only to Carnage as they closed it out on two unanswered tallies. It would have been expected for S.Musacchio to net at least one of his clubs eight goals, but the sniper decided to change his role by setting up five goals instead.

E.Skafidas collected six points in the third period alone to spark a comeback that sent the roaring Screaming Eagles to defeat the Fatal Demons. The Screaming Eagles forward went off like fire cracker riffling four goals and two assists to put an exclamation point on the match. The Fatal Demons normally protect their lead well, especially when preserving it heading into the final frame. And it's not like they had a disadvantage in their body count compared to the Screaming Eagles, who were way shorter in that department. This collapse and failure to put the game away was clearly caused by not containing one particular player.

Horsemen rally in third to down Knights in overtime

Two power play opportunities couldn't have come at a better time for the Horsemen. Down 2-0 heading into the final frame, M.Kardum and V.Pandza were finally able to kick start their offense by providing two markers with the man advantage. Then, the knockout punch was delivered when J-K Cazeneuve came through in the sudden death frame. Throughout most of the match, the Knights were in control getting some limited offense along with S.Sauk frustrating their opponent by making timely saves. Unfortunately, they ran into some penalty problems which ultimately they paid the price for.

After coming off a ridiculous six point performance in an earlier match, E.Skafidas wasn't done yet with his night. And although he didn't put up crazy numbers, one moment was all it took to merit some acolytes. The Screaming Eagles let go of a 3-0 lead but were able to recover when E.Skafidas bagged the overtime winner. To his help, S.Hrivnak was perhaps the catalyst behind the win as he provided points in all four goals that included three helpers. United didn't get a great start to their night but were definitely better for two straight periods only to get a little unlucky in the end. A.Tachejian, H.Jerjian and G.Jerjian did all of the damage in the loss as the three players combined for five points.

Horsemen run out of steam after gruelling double header night

Granted, for nearly half the game, the Horsemen hung in there with a more energized opponent. Then, they fell to the hands of one particular player. In the second period alone, E.Mavroudis killed the game by riffling four straight goals for the Buckshots. That sequence alone was enough to convince both sides where this contest was headed. The Buckshots had all but one period to ride after grabbing a 7-4 lead against a team that played earlier. Other notables include K.Kavan, who scored once while setting up seven goals, and Y.Derohannessian that collected five points.

The SalumiVino player of the night goes to Evan Skafidas of the Screaming Eagles. There was no doubt that E.Skafidas was instrumental in both wins of a double header night for the Screaming Eagles. After single handily winning a third period on six points in his first encounter, E.Skafidas capped off a great night by bagging the overtime winner in his second match.