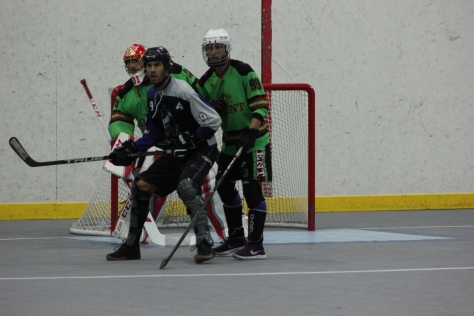 Degenerates able to shake off a slow start

While the Degenerates had nothing going for them early on, the Ice Breakers were gaining momentum leading comfortably 2-0 by the mid way point of the second period. And although it wasn't their ideal start, things eventually turned around fro the Degenerates. Twenty eight seconds was all it took for S.Marricco and A.Lanni to respond and dust off the cobwebs. From-there, neither side had a real edge as they settled for a draw. But one thing that did carry over was the desire and dedication-from the Degenerates part to try and capture the win. This time, they took the lead and played it to their advantage. S.Fabrici used a one timer to get the ball rolling, and for a second straight game, S.Marricco and A.Lanni were able to score. The Ice Breakers attempted 18 shots towards J.Atch who denied all of them to earn the shutout.

N.Gilbert will keep showing game in and game out how significant he is to his team. After netting a shorthanded marker that stuck for the winner, N.Gilbert was just getting started offering more to come. The crafty defenseman played like he was on a mission bagging two more goals while adding a shootout tally. Venom would have preferred a better outcome but won't mind settling for the draw after trailing 2-0. M-A Piche scored once in both games for the Orient and could have decided the outcome in the shootout only to be denied by M.Trivisonno.

With the Punishers in jeopardy of dropping their opening game versus Legacy, M.Arkalis came up big collecting three straight points in the last two minutes. To his help, C.Gingras set him up while providing the go ahead marker. Legacy appeared to be fine with E.Girouard filling up the opposite net with three tallies. That was up until a late push back flipped the direction of the game. It was evident that Legacy didn't have the same assertion in the following match. And even though they struck first very early on, Legacy felt their way to yanking control of the game by giving up four straight markers. During that time,C.Gingras continued his dominance by collecting three more points that included two goals.

It was just unfortunate that the Dragons were on the other side of a player that couldn't be stopped. Throughout both games, M.Carpentier was steaming hot registering six goals, an assist and a clever shootout marker. The 1 Timer out matched the Dragons in every aspect of the game en route to an easy 8-1 win. Clearly, they weren't happy with the way things ended, especially for a side with that much experience and pride. There would be no doubt that the second encounter would be way closer. The Dragons, although they couldn't wrap it up in regulation time, found away to earn the win in a shootout. D.Gagnon and E.Girouard came through using their patented moves to figure out F.Koch while P.Assadi stopped two of three attempts.

The SalumiVino player of the night goes to Maxime Carpentier of the 1 Timer. His dominance and artistry was on full display Monday night as he was able to collect a ton of points along with a remarkable back hand goal in the shootout.