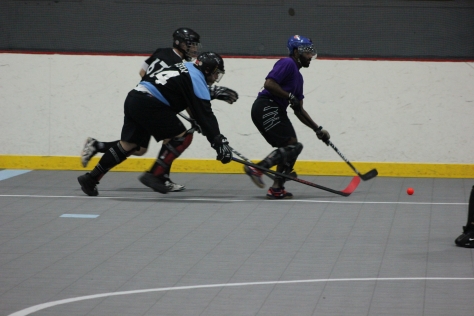 Sometimes teams are stuck being in an unfortunate circumstance. At the end of it all, the Family just didn't have the man power it took in order to get the result they needed. They did get off to a near perfect start roaring to a 3-1 first period lead. From-there, the Brewers felt it was only a question of time before they started to get their breaks. Eventually, they evened the score when E.Bouchard struck by the eleven minute mark of the second period. The third period was perhaps expected of the Brewers to continue their pace due to their man power. T.Fernando came through twice in a very short span to notch his fourth and provide a two goal cushion. The Family put everything on the line despite having only one player to change with. Unfortunately for them, they won't be participating in the playoffs.

National making sure to get back on track

National hoped to end their little slump against the Chiefs on Tuesday night. They knew that a good start would put them right on track. After taking the opening period 2-1, the goals just came piling in for National. M.Beaudry led the charge as the solid d-man buried three for a hat trick. The captain was also very productive as M.Pinheiro set up two tallies in the first before adding a pair later on. The Chiefs struggled to contain the speed of their opponent which had them playing on their heels for most of the game.

G.Lipariti was able to notch his second that snapped a third period tie for the Bramabulls. Up until that point, the Bramabulls never played with the lead. That was because the Templars did all they could to protect it having to deal with only one spare. However, fatigue would play a factor and the Bramabulls would eventually seize their moment. S.Ruggiero had set up two teammates before stamping the game with an empty net goal. B.Verducci stopped nearly 30 shots to earn the win in net.

T.Settino and Pylons close out a strong regular season

It was another tremendous performance by T.Settino as his four goals enabled the Pylons to capture first place of the division and a first round bye heading into the playoffs. As a result of his scoring barrage, T.Settino claimed the scoring title finishing with 27 points. But as personal stats can sometimes be gratifying, the Pylons centre man has bigger and more obvious ambitions in front of him. The Pylons are glad to skip the first round in a division that has all seven teams as potential winners. For now, they'll reflect on a great regular season, but will be more focused on an even more important post season ahead of them.

With the Pylons securing first place and an automatic spot to the semi finals, the first round matches are as follows:

(2)National vs Devil Dawgz(7) National will be quicker overall as a team and dictate much of the pace. Despite all that however, the Devil Dawgz strengths rely on their man on man coverage while depending on a couple of key pieces to score.

(3)Brewers vs Chiefs (6) Both these teams have a lot of similarities. So close that anything can happen. The Chiefs will need A.Benedetto to elevate his game between the pipes. If they get the goaltending required, the Brewers will have their hands full.

(4)Bramabulls vs Templars(5) This is a battle that both sides will look forward to lacing their shoes. So much will be on the line for two teams that don't want to lose this particular match up. It should be stingy, intense but yet exciting. A betting man would be a fool to take one team over the other for how evenly matched they are.

The SalumiVino player of the night goes to Tony Settino of the Pylons. As he's been an instrumental centre piece for his team all year long, T.Settino finished off his season in style, providing four goals to ensure him the scoring title with 27 points.