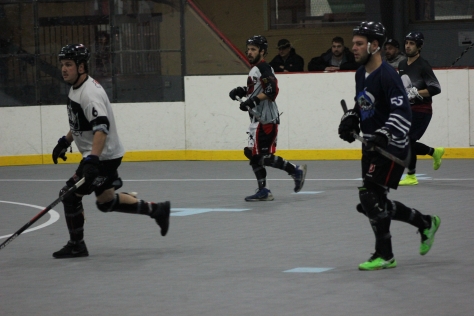 Fat Roy fire away in third to eliminate Screaming Eagles

With both teams facing elimination, Fat Roy played a little more desperate erupting in the third on five unanswered goals. Throughout the first two periods and change, the Screaming Eagles stood by their opponent with the game all tied up at three goals apiece. It was perhaps expected that the outcome was going to be decided by a slight margin with so much on the line. However, it wasn't the case at all. In the span of nine minutes, the tides turned and Fat Roy took over piling five straight markers. K.Fiore and J.Pantelis came up big on some terrific plays as both players each scored twice during that stretch. This result sends Fat Roy into the semi final round. The match ups are as follows:

(1)Fatal Demons vs Fat Roy(4)  There is no doubt Fat Roy are feeling good about their game. There next challenge will be against the division leaders. Winning always comes down to a variety of factors. In the case of this matchup, both teams have their strengths and will need to use them in a lengthy best of three series.

(2)Wocafloka vs Left Wings(3) Strong in all three areas of their game, both sides have enough game changers to make the difference. This one will come down to timely breaks,defensive awareness and of course goaltending.

The SalumiVino player of the night goes to Jimmy Pantelis of Fat Roy. When the offense needed an awakening, J.Pantelis was able to spark it on four points that included two goals.

Dominance of top players continues to be a problem for everyone

There is no secret by now that in order for the Buckshots to slow down, teams will need to figure out on how to do so. The problem is that it isn't one or two players but four to five in particular to contain. The Knights knew they had little to no chance on this specific night having barely enough players to play the game. To their credit, they kept the contest levelled up until the five minute mark of the second period. That's when the fireworks lit up and the Buckshots whaled away scoring goal after goal. K.Kavan, E.Mavroudis, Y.Derohannessian, M.Destounis and N.Kokovidis combined for 28 points with Kavan leading the charge up front with four goals.

M.Mamoulides early third period power play goal was the difference on the scoreboard

With M.Mamoulides providing an early third period power play goal, the Horsemen were able to edge out an opponent that they will be facing in the first round of the playoffs. That key tally came early in the final frame leaving more than enough time for an equaliser. But with M.Vinciguerra guarding the cage, the net minder was excellent and never got flustered making enough saves to preserve the lead. V.Pandza was also a factor as the captain led the way posting two tallies.

Carnage salvage night with bounce back win over Mighty Drunks

Even though it happened an hour earlier, Carnage wasn't fazed in their quest to capturing a win on a double header night. They came out pretty well as of the second period .By playing assertive, being aggressive and staying on top of the Mighty Drunks, the frame was deservingly won. J.Bourlakos widened the margin to a pair of goals after netting back to back tallies. From-there, S.Musacchio grabbed the torch and put a stamp to the night bagging three markers for another hat trick. Carnage was able to get some added production-from D.Constantineau, who set up four tallies, and the captain F.Pace that was able to accumulate three helpers.

The F division regular season came to an end on Wednesday night. The top four seeds will be playing in a best of three semi final round. The match ups are as follows:

(2)Carnage vs Horsemen (3) Look for this series to go either way. The Horsemen just handed Carnage a narrow 4-3 loss which suggests for a very close battle.

The SalumiVino player of the night goes to Stefano Musacchio of Carnage. His three timely goals helped Carnage salvage their double header night.