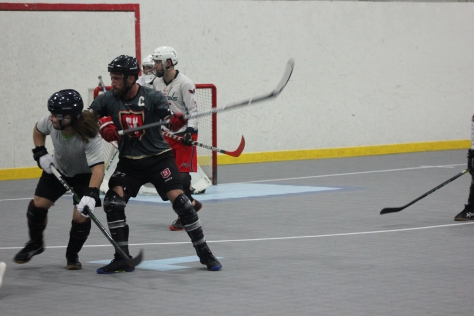 Despite giving up the opening and closing goal of the game, the rest in between belonged to the GK. The Capitals managed to hang in there long enough but eventually realised it was done when M.David and F.Belisle each struck early in the third period for a 4-1 lead. It was clear that the up hill battle from that point on felt unrealistic for the Capitals having to go up against a team can shut anybody down. In his season debut, P-O Girouard did not disappoint forming his brick wall structure stopping close to 20 shots. The win saw four different players cash in with M.David’s third period marker holding up for the winner.

(2)Montreal As vs Black Knights(5)

Y.Derohannessian’s late shorty seals the deal for the Black Knights

Y.Derohannessian couldn’t have picked a better time than to notch a shorthanded goal. Although the Black Knights were in front 3-2, that tally pretty much summed up the game between the two sides with just over three minutes remaining. It was an overall solid performance from the two teams with each side carrying the play. M.Ianovale struck first to get the balling rolling for the Montreal As and didn’t give up their first tally till the four minute mark of the second period. Once the game was tied, J.Gagne took over bagging two in a row to put the Black Knights in the drivers seat. A.Lemay did eventually respond to reduce the gap but it was all for nothing as Derohannessian struck shortly after with a huge blow.

The SalumiVino player of the night goes to Jonathan Gagne of the Black Knights. Big time players know when to show up when the game is on the line. J.Gagne was proof of that once again for the Black Knights collecting back to back tallies after snapping a dead lock 1-1 tie.