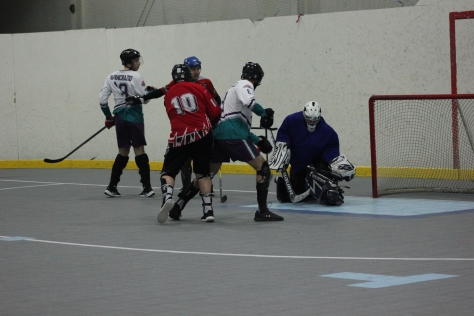 While both games started well for the Mighty Cucs, it just didn’t continue that way. Perhaps the biggest reason was due to the lack of tight coverage versus a team that can hurt you at will. The Dragons have some fire power throughout their line up, and whether its B.Daniele’s viscous wrist shot, E.Girouard’s precise one timer or even J.Mandracchia dangling with the ball for long periods of time, the order was tall to contain so many moving parts. Both results were fairly close with the first encounter sealed on three empty net goals while the second match was decided on a pair of tallies .B.Daniele riffled a hat trick in the first contest with all three markers coming-from the back end of the court. Surprisingly enough, J.Mandracchia only scored twice for how dominant he was controlling much of the play. With these results, the Dragons now sit on top of the second division and will try to remain there with only two weeks remaining.

Besides getting balanced scoring, the Golden Knights play strong defense just as well. They held the opposition to one goal in each game limiting them to only 22 shots. It was perhaps expected that both games would go the Golden Knights way, especially with the fact that they were fully loaded while the RCGT Knights relied on a depleted line up. Five different players contributed in the opener en route to a 5-1 victory. M.Labrie and S.Racicot would collect two goals each in the second encounter for a similar result. In the end, the Golden Knights didn’t give much, and controlled most of the play which led to a pair of easy wins.

After a disappointing let down to start off their night, the Orient bounced back with a 4-3 shootout win over the HBHA Seniors. In one single period, the HBHA Seniors were in a league of their own ,scoring five times that led to a convincing 5-2 victory. The expectations remained the same entering the ensuing match for the HBHA Seniors, but the Orient had other plans. A late tally by M.Morin forced a shootout where M.Monteschio would come through as the only player to score between the two sides. The HBHA Seniors will look back and feel that they deserved better, especially after grabbing a 2-0 lead along with carrying a one goal margin for most of the game. F.Nasser was behind setting up two markers in the win for the Orient while E.Paradis-Levasseur can be argued was a major reason why the game went the distance. The net minder was brilliant which enabled his club to bounce back and steal the second match.

After looking sloppy in their opening frame, the Degenerates used a big second period and never looked back the rest of the way. The comeback effort was led by M.Kardum, who tallied twice in a vey short span putting the Degenerates in front for the first time during the night. There was no doubt that sequence gave the Degenerates more life entering the second game. This time, they made it a point to focus-from the beginning and grab that early lead. Once they jumped in front, the snow ball effect was in motion as they just continued to create plenty of chances that resulted in six unanswered goals. S.Marricco got credited the winner, R.Ricaurte went flawless for nearly three full periods in net, and the Degenerates continue to play some good hockey as of late.

The SalumiVino player of the night goes to Marin Kardum of the Degenerates. If not for his two timely goals in the first encounter vs the Hungry Hippos, the Degenerates would have likely dropped their opening game.