high temperature Replica Watches UK baked paint, until now also applied to most of the movement table, this surface is the characteristics of the disk edge, the window position and the middle of the hole position of the hole has a sense of melting down, the formation of A slow slope, as if the molten liquid with its own gravity down, Replica Watches down, dry after the formation of the same effect, this Replica Roex Watches surface is generally very resistant to corrosion and very moisture-resistant, not easy to change color, to maintain a long time Bright colors.However, Replica Handbags uk these years in addition to the black side, but also rarely produced such a color face plate. Even if there are some color dial watch, the use is not the same process, to achieve this is not the effect. But also because of this, this type of Replica Handbags in the secondary market is very popular.
Fatal Demons winners of Masters 35+ division 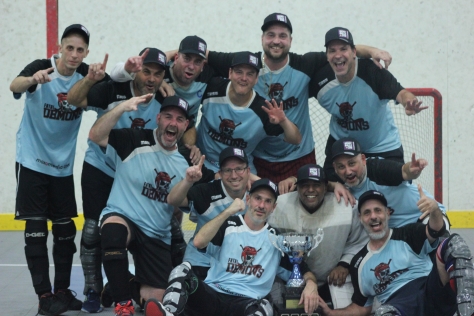 The Fatal Demons claimed a slender 5-4 victory in what was a dramatic way to start off the series. The game kept going back and forth, and was finally stamped when S.Ruggiero posted his second late in the game to secure the outcome. The Assadi Consulting inc responded however in game two racing out to a dominant start riding three consecutive goals. In what appeared to be a comfortable lead,  didn’t quite transpire that way with the Fatal Demons creeping back into it .G.DeMarinis had a strong finish posting two goals, but it just fell short with C.Pisanelli’s winner holding up. Up until that point, both sides spurned numerous chances in a compelling and breathless clash that set up the final stage to see who would prevail in game three. You almost feel obliged to get that first goal in a twelve minute game as its always proven to go a long way. T.Langiano provided it by the five minute mark of the match for the Assadi Consulting inc. As much as its nice to jump in front in such a pivotal contest, the Assadi Consulting inc may regret not making the most of extending that margin. They could have caused serious damage if a second tally were to follow. Instead, the Fatal Demons upped the tempo, and eventually got on board thanks to M.Chenier. The Fatal Demons looked  determined to add to their tally which took only moments before G.DeMarinis ripped a one time after getting a sweet pass-from A.Zarzour. Now that the Fatal Demons found themselves up by one, the Assadi Consulting inc went into survival mode making the best of the little time left over. Unfortunately, they gave up another marker only a minute later courtesy of K.Araujo which ultimately decided a thrilling series. The Fatal Demons showed throughout the playoff season their commitment to battle hard with lots of hunger coming-from many skilled players and a solid net  minder in R.Ranieri. Efforts as such can only pay off in the end. After a successful regular and post season, its safe to say that the deserving team gets the recognition they deserve. On behalf of Hockeyballe.com, congratulations go out to Pat Santullo and the Fatal Demons for capturing the Masters 35+ division.

The SalumiVino player of the night goes to Rino Ranieri of the Fatal Demons. Ranieri capped off a run on a masterful performance against a very lethal offense. With his aggressive, unorthodox style, the net minder was there when the Fatal Demons needed him the most making a ton of key saves that enabled his side to claim a deserving title.