high temperature Replica Watches UK baked paint, until now also applied to most of the movement table, this surface is the characteristics of the disk edge, the window position and the middle of the hole position of the hole has a sense of melting down, the formation of A slow slope, as if the molten liquid with its own gravity down, Replica Watches down, dry after the formation of the same effect, this Replica Roex Watches surface is generally very resistant to corrosion and very moisture-resistant, not easy to change color, to maintain a long time Bright colors.However, Replica Handbags uk these years in addition to the black side, but also rarely produced such a color face plate. Even if there are some color dial watch, the use is not the same process, to achieve this is not the effect. But also because of this, this type of Replica Handbags in the secondary market is very popular.
Le Rinque Dek Elite Champs 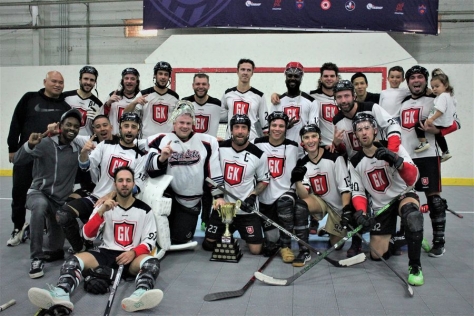 The first game of the playoffs is often about messages. T.Bozinakis, N.Tsataronis, J.Adamou and C.Gingras each scored for the Hockeyballe.com, who carried a 4-0 lead until two power play goals by the Dek Ultimate finally got them on board a little to late. It may be only the first round, but definitely a very good start moving forward as they prepare for a bigger task versus Le Rinque. It was as complete a performance as this group of Hockeyballe.com have mustered. They won battles, they blocked shots, and they scored on their chances while getting the timely saves-from C.Stavriadis. As they enjoy the moment for now, Hockeyballe.com know they need to be better going up against the front runners of the division. Confidence will play a role as will hard work and some lucky bounces.

The Centre SportXpo couldn’t say enough about their fearless goaltender on Saturday afternoon. G.Vermette stole the show making one big save after another to help enable his side to a very close 2-1 decision. Vermette continuously bailed out his defensive corps with numerous key stops throughout the game, styming some of the Dek Lanaudiere top snipers. Going up 2-0 always helps with J-F Moquin and Q.Syrydiuk taking care of the scoring for the Centre SportXpo. Rather than facilitating their two goal margin however, the Centre SportXpo played with fire after surrendering a shorthanded marker by S.Dicarie. Out of nowhere, this contest was now up for grabs for the Dek Lanaudiere, who continued to press while throwing everything they got in hopes of tying the game. Despite some very dangerous scrambles in front of the net, G.Vermette and the Centre SportXpo remained poised to keeping it a one goal game. Eventually, the clock would bleed out in what was expected to be a very tight knitted affair between these two teams.

Close while it lasted, Le Rinque pull away mid way in final frame to top Hockeyballe.com

For a very good portion of this contest, nothing was settled on who would come out on top between these two clubs. Eventually, Le Rinque began to settle in, and the hopes of the Hockeyballe.com became more and more dim. Chances began emerging for Le Rinque, who were able to brake the game wide open courtesy of K.Leveille and P.Genereux striking only 20 seconds apart. That sequence occurred with only eight minutes left in the game, which despite the amount of time left over, Le Rinque wasn’t going to falter such a lead. When going up against a power house, all you want is to have the ability to compete hard enough to give yourself a chance. The Hockeyballe.com had that fire and bite in their game, but weren’t able to capitalise on their few chances. Both net minders played a role with perhaps C.Stavriadis being a little busier than his counter part L.Augustin, who needed to be very sharp. The win came with a balanced effort-from five different players finding the back of the net while J.Adamou tallied his clubs lone marker on the power play.

Le Rinque is simply made for nights like these. No matter what the circumstances are or who they face, they always will find a way to beat you. The Centre SportXpo understood the task at hand, and in the large part couldn’t have asked for a better start to their night. Being tied after one frame in a two period format is a deal any team will take going up against Le Rinque. As long as the game remains close, there is always a chance. That being said, how long can you keep a power house at bay. The answer to that question came almost immediately in the last period. Three and  a half minutes was all it took for this story line to set its stage in what had a completely different script compared to the first portion of the match. Y.Labonte snapped a 2-2 tie on a shot-from far that had eyes to hit a top corner. Still , nothing was yet set in stone until perhaps the nine minute mark when B.Jutras doubled the lead for Le Rinque. The Centre SportXpo must have felt the walls closing in as they had to battle-from a two goal deficit with half a period remaining. Unfortunately, they couldn’t climb back into it and only found themselves in a deeper hole with Le Rinque increasing their margin. It just seemed that there was little they could do matter how well they played. Le Rinque will always have that trick up their sleeves no matter the situation during a game. Because they are so complete, an opposition cant really formulate much of a game plan. Its not like they have a few players to watch for while neglecting some of the others. In their case, they all can hurt you at any given time. Proof if it was that seven different players scored in the win that included at least three highlight reel goals. J.Bradley scored an incredible tally by taking on a defenseman before finding a tight spot that only a marksman can target. In the end, the team that expected to win reached the finish line first. On behalf of the Quebec Ball Hockey Association, congratulations go out to Dan Nguyen and Le Rinque for capturing their second straight Dek Elite title.

The SalumiVino player of the night goes to C.Lantin of Le Rinque. While the forwards tend to get most of the credit, Le Rinque own all three areas of the game starting with their net minder C.Lantin, who was stellar once more .