high temperature Replica Watches UK baked paint, until now also applied to most of the movement table, this surface is the characteristics of the disk edge, the window position and the middle of the hole position of the hole has a sense of melting down, the formation of A slow slope, as if the molten liquid with its own gravity down, Replica Watches down, dry after the formation of the same effect, this Replica Roex Watches surface is generally very resistant to corrosion and very moisture-resistant, not easy to change color, to maintain a long time Bright colors.However, Replica Handbags uk these years in addition to the black side, but also rarely produced such a color face plate. Even if there are some color dial watch, the use is not the same process, to achieve this is not the effect. But also because of this, this type of Replica Handbags in the secondary market is very popular.
Draft League Tuesday 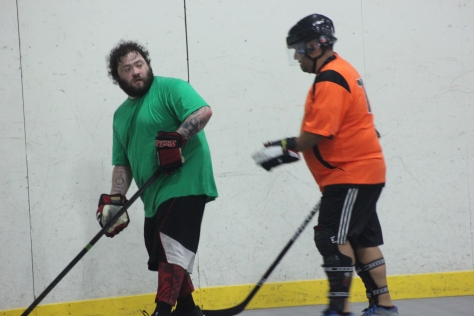 A late surge of goals for Team Red made the difference as a close game ballooned into a landslide by the time it was said and done. For just over thirty minutes, Team Purple hung around trailing only by a pair. But Team Red picked up the slack-from that point on riding five quick goals to distance themselves. J.Choudhry stepped it up once more collecting a hat trick while K.Ferreira and T.Scarpelli cashed in twice. It just seemed as though Tem Purple couldn’t keep up long enough as the game went deeper. S.Catalano bailed his side as much as possible until the net minder was out done by a wave of constant pressure. Maybe some renewed energy was required-from a side that wasn’t able to keep up versus a more dynamic opponent.

The SalumiVino player of the game goes to C.Nguyen of Team Red. After getting her club on board early on, C.Nguyen orchestrated many plays that resulted in four helpers.

For a while on Tuesday night, it looked like Team Blue was able to hand a rare defeat to Team Black. A solid good portion of the game was eventually undone by the 40 minute mark where M.Dearing snapped a 3-3 tie giving Team Black its first lead of the night. That was Dearing’s fourth point of the contest, who collected three prior assists that saw C.Arnoldo benefit twice. R.DeMarco, who was excellent throughout the entire match gave Team Blue a really good chance to win this game. The highly skilled defenseman played a major role by not only trapping plays, but by producing offense as well participating in all three tallies. A.Zafiropoulos also had a solid outing for Team Blue bagging a pair that included a beautiful top corner. When scoring is relatively low, its because your goaltenders have plenty to do with it. A.Michalidis remained sound in net to earn the win over his counter part J.Sanoudakis, who gave his side a legit chance to steal this game.

The SalumiVino player of the game goes to Claudio Arnoldo of Team Black. After finding themselves down 2-0, the natural sniper gave life to his side converting on two straight occasions while setting up B.Panarello to even the score at three goals apiece.

Team Yellow putting it together on balanced scoring

Its been now a few games that Team Yellow have banded together. When a bunch of guys buy in and start doing the right things, you can start to see a lot of good happen. Many things went according to plan on this night starting with B.Mourad guarding his cage. Even though the score may suggest a lopsided affair, that was only because Mourad kept it that way. Team White peppered the net minder enough times to make this game closer than it looked. While the goaltending played a big role, so did Team Yellow’s balanced scoring as four different players took turns collecting two goals a piece. E.Colella, G.Missakian, A.Zakarian and P.Desforges were the ones to hit the back of the net on two occasions. Right now, the confidence level is getting pretty high for Team Yellow, who need to keep it in perspective as every game will require a full out effort if they plan to continue winning games.

The SalumiVino player of the game goes to Brian Mourad of Team Yellow. On many occasions, the net minder denied shots toward him that enabled his side to counter and produce enough times to capture the win.

Maybe sloppy at times with some neutral zone turnovers is the reason why this game ended 12-8 favouring Team Orange. Definitely entertaining for anyone who likes goals. However, the net minders couldn’t be to happy as they often felt the burden of getting little support. Team Orange had the better start with A.Gold setting the tone with two straight goals .D.Lipinski  may have been the constant threat throughout most of the match controlling the back end very well while putting up plenty points. The skilled defenseman  collected six points that included a hat trick. Both sides didn’t struggle at all getting a supportive offense. E.Allen provided it as well for Team Green bagging a hat trick while P.Paikopoulos buried a pair. By taking the early lead, Team Orange was able to control the pace by playing in front the entire time despite it being a burn burner.

The SalumiVino player of the game goes to Dave Lipinski of Team Orange. No doubt Lipinksi supported the entire area of the court by defending well while generating a ton of chances that resulted in a six point performance.