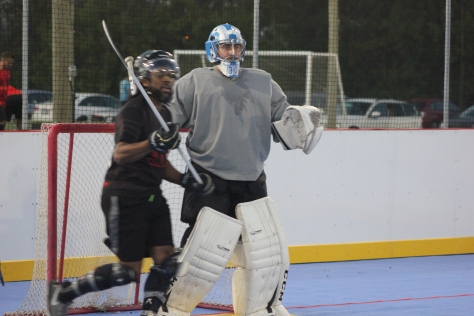 M.Pinheiro has a hand in every National goal

It just seemed that everything M.Pinheiro touched turned into something extraordinary on Thursday night. National celebrated a pair of close victories versus the Family thanks to their captain's brilliant performance. After earning a 4-2 victory to jump start the night, National duplicated their efforts in the ensuing game matching an identical score that saw M.Pinheiro involved in every single goal. Since National had only two changes to their bench, the same few players were able to accumulate some decent numbers. S.Laplante being one of them as the crafty defenseman collected a total of six points. As for the Family, K.DiLallo was their best player scoring twice while setting up his captain M.Freda.

Throughout most of the night the, Left Over's were able to execute their game plan. They were ready to go and immediately put the Stomachs on their heels. S.Marricco did strike twice but could have had many more if not for S.Fraga keeping it close. The second encounter was slightly closer with the Stomachs leading 2-1 at one point. The problem was that the lead barely lasted with S.Marricco continuing his onslaught of goals. The Left Over's forward was an absolute force collecting four tallies as a part of a six point performance. And while he was a significant piece to the puzzle, C.Doulis was just as prominent for the two victories as the versatile player combined for three markers in both games.

The SalumiVino player of the night goes to Marc Pinheiro of National. With his team scoring eight goals in two wins, M.Pinheiro was involved in every single one of them to help lead his club over the Family.

Left Overs run all over The Family to take convincing wins.

From the start of the game it looked like the Left Overs were in a class of their own taking advantage of the multiple opportunities their opponents gave them and they made sure it was felt. Game 1 was rather different for the Left Overs who used a team effort to get all their goals while in the second game S. Marrico took care of the majority of the scoring riffling five goals while Y. Leroux also found the back of the net twice. The Family will need to get some more offence or play a better defensive game to stay competitive in these games.

The SalumiVino player of the night goes to Sandro Marricco of the Left Overs. The talented forward carried his team offensively tonight scoring six goals and setting up another in what was a productive night.

National finding it hard with only 6 players

Entering their second week of the season, National has yet to address their short bench, and in consequence have now dropped four in a row. M.Pinheiro understands full well that this can't continue on, especially if they plan to challenge a team like the HBHA Seniors. Tonight proved it as they fell short in both games. Perhaps the only reassuring part is that both games were fairly close. The opening contest ended 3-2 thanks to a late goal by M.Pololos. The second encounter saw D.Andrade take plenty of control of the match. After netting a shorthanded marker, Andrade went on to score his second just before the first period ended while eventually feeding an empty cage to solidify a second straight win for the HBHA Seniors. Despite the losses, M.Mogianesi was very productive for National netting a total of three goals as a defenseman. To his help, M.Pinheiro fed him twice as part of a three point performance.

Stomachs respond after being thought an early lesson vs Family

Half a period was all it took for the Family to hand the Stomachs a spanking. For about three quarters of the game, the Stomachs appeared to be in control of the situation. After all, they led 1-0 on a goal by K.Tsoukalas while getting stellar goaltending-from R.Ricaurte. Then, it all fell apart. The Family went on an absolute tear erupting for five straight tallies. During that span, S.Cavallaro strung together two quick goals right after M.Sasso was able to break the barrier. Even though the night started strong for the Family plenty of work was still ahead of them if they planned on going undefeated. Clearly, the Stomachs couldn't digest their loss and made sure to re organise and put out a better performance. They did manage to tweak their game but it still required an overall team effort in order to get it done. After a 1-1 first period tie, Joe DeStefano used an early second period goal that would ultimately hold up.

The SalumiVino player of the night goes to Steven Cavallaro of the Family. After trailing 1-0, The Family eventually responded in large part due to S.Cavallaro's assist followed with back to back tallies.