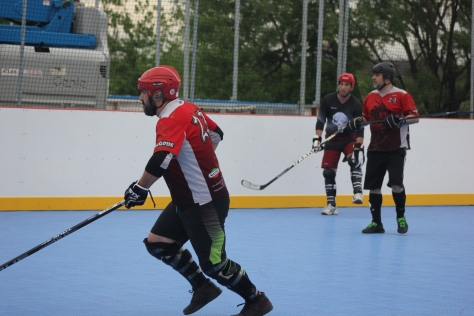 Dragons saving their best for last

From-another slow start to their night, the Dragons seem to be saving their best for last. Sometimes teams need a little time to get the ball rolling which seems to be the case for the Dragons. Similar to last week's results, the Dragons suffered another one sided affair only to respond heavily in the ensuing match. The Punishers clearly didn't see it coming. Five goals went in the first period alone with E.Girouard leading the charge on a pair as part of a four goal performance. There was no way the Punishers could have responded after finding themselves down 5-1. Both sides went on to trade three goals by the second period which saw the other half of the dynamic duo S.Robineault post five points. As for the Punishers, P.Arkalis and his brother M.Arkalis caused the most fits for the Dragons as both players combined for seven goals and eleven points.

Venom seems to be rolling on all cylinders, and tonight was just a continuation of their good start to the season. However, it did take some time to get it going, but once it did, the Excalibur had no answers. J.Parisella and J.Vinet were the only two players to score with Parisella leading the way on a hat trick. Much of the second encounter resembled the first one. The only difference was that six different players took turns finding the back of the net. It showed-from the get go that Venom understood how each and every player are able to find one another. S.Sauk knew this but was unable to send the message clear enough on how to try and slow things down. When one or two players get caught losing their man, the ball usually lands behind the goaltender. The Excalibur have some scoring power but did not address the coverage well enough on this particular night.

F.Koch and the 1 Timer grind out a pair of wins over Degenerates

It was hardly a masterpiece, but the 1 Timer did what they needed to do versus the Degenerates. Led by their net minder F.Koch playing some lights out hockey, the rest of his crew in front of him played to their full potential, and in the end, were awarded with a pair of victories. J.Guye-Perrault nodded the winner in the opening game. The second encounter was where F.Koch dominated his cage turning aside 20 shots for a shutout. C-T Perrault's first period goal proved to be just enough for the positive result. When players play well in front of their goaltender, oppositions will often find it hard to generate enough quality chances. The Degenerates did get their fair share but kept hitting a wall.

The SalumiVino player of the night goes to Jordan Parisella of Venom. The forward made every one his four goals look prettier than the other.