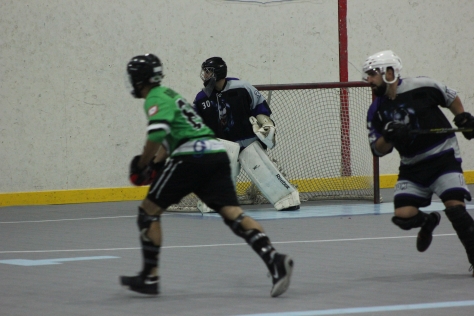 Venom proved unstoppable in their last season, dropping all but one game while securing the 4vs4 division title. M.Trivisonno and his troops were eager to continue that momentum, and it showed right away as they took both their games versus the Orient. With J.Courteau leading the way on a hat trick in the opening contest, Venom relied on a little more balance in the ensuing match getting goals -from five different players. The Orient gave them a tight challenge for a whole period keeping the game levelled at 1-1, but that all changed by the second frame where Venom ran away with the match. J.Vinet and J.Mandracchia scored twice, J.DeSua netted the winner and M.Trivisonno limited his opponent to only three goals in both games.

In a game that was tight as anything, tight enough that it felt like everyone was waiting for someone else to make a mistake, S.Marricco found some open space and made a pair of incredible plays to decide the first encounter. His hat trick clearly inspired a rusty Degenerates side. Even though the next match had no winners, the Degenerates refined their game making it more difficult for the Chic Choc to generate much offense. Both net minders were however a big part of the 1-1 draw. J.Atch made his job look easy allowing only one shootout marker for the Degenerates. The same applied to F.Peloquin, that unless you beat his clean, the net minder won't give much. A.Lanni tallied in the shootout for the Degenerates right after M.Ethier got his club on board for the Chic Choc.

1 Timer, haunted by their own power play

Two games into the season, and the 1 Timer covered a great deal of their game except for one particular area, and that was on their own power play. With a chance to cash in three points in the first game, N.Mackeen used a late shorthanded marker to help send the game in a shootout for the Punishers. However, the 1 Timer did eventually earn the win thanks to a pair of breakaways goals by M.Charpentier and T.Daigneault. Then, in a similar event occurring late in the second match, the 1 Timer had another opportunity to bury their opponent. The game was tied 3-3 when the 1 Timer had four minutes of power play time with just under five minutes remaining in the game. And rather than putting it away, the worst case scenario occurred. This time, C.Gingras proved once again what he's all about when facing adversity. In the short span of only 30 seconds, C.Gingras buried two shorthanded goals as part of a six point performance. This isn't the first, and won't be the last time that C.Gingras rescues a team when pinned against the wall.

The SalumiVino player of the game goes to Jay Atch of the Degenerates. In his season debut, the net minder did not disappoint enabling the Degenerates to escape with four out of a possible six points. Atch was solid in both games earning a shutout in the second encounter.