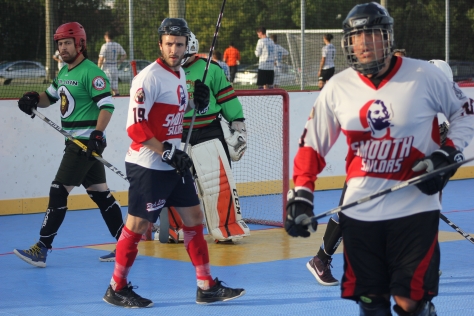 The Smooth Sailors poured in 26 shots in the opening game, but T.Chouinard and the Orient held on for a 1-0 nail biting win. The lone tally came very late when A.Fahra finally solved M.Jobin. Despite their continued pressure, the Smooth Sailors knew it was only a question of time before they would get on board. Finally, that was the case in the ensuing match with the help of a pair of power play goals and an early even strength maker by M.Testolina. The Orient managed to equalise in the opening frame thanks to Y.Derohannessian but eventually fell behind giving up two straight power play goals. M.Cerone scored with less than two minutes for the winner right before F.Nasser pulled his club within one only to run out of time.

Classics & Excalibur go to the wire in split

Both teams had to endure four straight periods of uncertain hockey that was ultimately decided in its final moments. The Excalibur took the first one in the shootout with M.Dupuis and S.Ruggiero getting the better of P.Assadi. The second match didn’t reach the shootout as two remaining seconds decided matters when G.DeMarinis celebrated just prior to the buzzer ringing. The Classics had to overcome a 4-2 second period deficit in order to split the night with the Excalibur. A.Henein and G.DeMarinis provided much of the offense as both players scored twice. Looking back, the Excalibur felt they deserved better if they could have played out the clock for only a few seconds in both games.

(4)Excalibur vs The Classics(5)

For three straight periods, the Bad Guys Inc  established their pace and did pretty much what they wanted versus the Punishers. P.Spadafora scored twice and P.Jacques provided three points for a convincing 4-1 win. Then, S.Lachapelle took over the reigns netting a pair of markers and the Punishers still didn’t have an answer on how to slow down their opponent. That was up until the final period and in the short span of only five and a half minutes. The Punishers finally turned it on with M.Arkalis involved in three big plays that saw his captain J.Fidrilis capitalise twice. Despite how in consistent they were on this night, games as such prove that you cant handle the Punishers for its entirety. The Bad Guys Inc will take this valuable lesson in games to come to never let their guard down no matter how well things are going.

The Degenerates came ready to play on Monday night and didn’t miss a beat handing the Nature Boys a pair of losses. They put forth a consistent effort knowing that their opponent didn’t have the body count to keep up, especially in humid conditions. Luckily enough for the Nature Boys, P.Delli Colli gave them every possible chance to potentially steal a game. As dominant as he was in the first match, the Degenerates managed to put three behind the net minder without a response. Much of the ensuing game resembled the first one except at one point when T.Foisy and T.Oliveira scored only seconds apart to level the game at four goals apiece. There was no doubt that the Degenerates were rattled seeing their grip on the game disappear. However, that didn’t stop their prolific goal scorer to take charge once more. Already with two goals and three assists, S.Marricco came to rescue his club with just over a minute left on the clock.

The SalumiVino player of the night goes to Sandro Marricco of the Degenerates. In both their wins vs the Nature Boys, S.Marricco had the biggest influence collecting six points that included a late game winner.