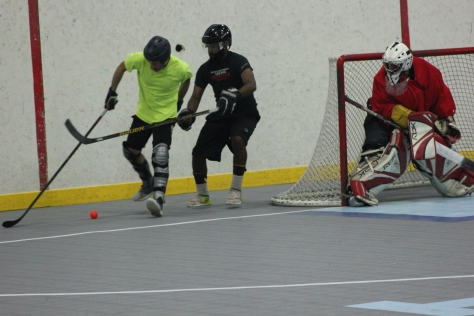 After a very convincing win, the Degenerates couldn’t sustain a strong start in the second game. They pounced to a 3-0 lead and seemed destined for another lopsided affair until the Nature Boys finally cracked the barrier. Once A.Pittarelli got them on board, the snow ball effect was in motion. The Degenerates played into the Nature Boys hands committing enough turnovers and mental mistakes to lose a game that should have at least gone into a shootout. The last goal was an absolute blunder, one that J.Atch knew he should have had. A.Pittarelli took the chance by sending the ball towards the net, and in doing so, was able to sneak one by the net minder to complete his hat trick. Luckily enough for the Degenerates, the game didn’t have any meaning as both sides were already destined to meet up in the first round of the playoffs.

It may be a very small sample size, but the Classics may feel like they are slumping as of late. A first place team never wants to finish off the way they did. The Classics pride themselves on playing structured sound defensive hockey but tonight they looked like a bunch of pee wees going up against a superior opponent. The Prolific Athletes simply had their way, combining for 13 goals in both games. Many players led the charge up front with N.Gilbert and Y.Gazura sharing four goals each. Even though the results went sour on this particular night, the Classics wont be too worried as they enter the playoffs. There is just to much experience to go around for a group of guys who believe in one another, and in the system they play.

(3)The Classics vs Prolific Athletes(8)

(5)Prolific Athletes vs The Classics(3)

S.Ruggiero haunts the Orient, fail to secure spot to the final

All they needed was that last win of the season. The Orient just came off a convincing 7-2 win versus the Excalibur and needed that second result in order to secure a straight pass to the final. Instead, they arguably let one single player beat them. S.Ruggiero single handily destroyed the confidence of a club that thought they had it wrapped up in the bag. And why not when you factor going up against team that was in last place of the second division. Every indictor pointed to a sure victory. That was until S.Ruggiero came to haunt the Orient. You have to ask how one player can sometimes do it on his own. However, when you have a nose for the net like Ruggiero does, these anomalies sometimes happen. The sniper was absolutely incredible riffling six out of the Excalibur’s eight goals. Four of his tallies came just shy of the eleven minute mark of the first period. And while the Orient will be hung over for a while after this defeat, the Excalibur will be riding a high as they managed to secure a playoff spot due to this victory.

The SalumiVino player of the night goes to Steve Ruggiero of the Excalibur. He came through and he did it at the right time of the season. Its always nice to have an established goal scorer produce in time of need. His six goals ultimately clinched a playoff spot for the Excalibur.

Tonight concluded the regular season of both divisions in the 4vs4 Monday’s. The top division will have the Orient go up against the Punishers while the Bad Guys Inc will patiently wait in the final. This series will come down to how well the Orient will contain three major threats- from the Punishers. If they play them smart, and get the timely saves-from there net minder, a spot in the final is within reasonable reach. But that is always easier said than done. The Punishers are lethal up front and will more likely produce in a big way.

The second division will have 4 teams challenge in the semi finals. The match ups are as follows:

(1)The Classics vs Excalibur(4) If the way you finish the regular season is any indication of what’s to come, than the Excalibur are feeling pretty good about themselves unlike the Classics that seem to lost their groove lately. But despite all that, both sides will do what is necessary once that ball drops.  Both teams have experience and a couple of players on each side that can hurt you offensively. Look to smart play, discipline and the goaltending to play big roles.

(2)Degenerates vs Nature Boys(3) They just finished playing each other and they both know that they can trade plenty of chances up front. These teams need to tighten up, and get required goaltending. Limiting mistakes while being opportunist will come into play. It could come down to the wire.