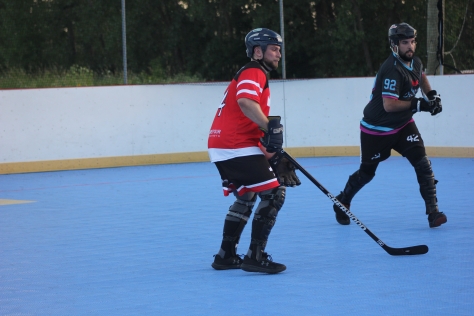 Altius had no answers for P.Abandonato

A P.Abandonato master class,  which saw him collect eight out of a possible nine points in two games , was enough to see off Altius in a fairly uncompetitive battle on Monday night. The Kings looked good-from the drop of the ball where everyone fed off their new addition. D.Lombardi and Abandonato complemented each other for the Kings first three goals before A.Olewinsky and M.Pietracupa capped it off on empty net markers. The Altius weren’t pleased on how things ended. You would have to assume a better outing was excepted -from a team with that much pride. That couldn’t have been further-from the truth as they laid another egg early on. It took just over five minutes for P.Abandonato to take immediate control. The highly skilled forward put a quick dent scoring twice while setting up M.Gibson to get the ball rolling. The Altius made the crucial mistake of leaving a familiar face unguarded throughout the entire four periods. Perhaps it was just a lack of attention to detail or the unwillingness to play well without the ball. Whatever the reasons, the Kings had a remarkable night defeating a really good hockey team twice.

Classics unbeaten run comes to an end at hands of Orient

The Classics lost their first game of the regular season on Monday night to a team that had a week on how to study them right. The Orient and the Classics met only a week ago with the Classics taking one encounter while drawing the other. A close mini series as such suggests that anything can happen. Finally, the Classics met their match, at least in the first game. Joe Saydi notched his second late in the game to tie it up at three goals apiece, and Ali Khanafer was there to snap the late tie giving the Orient a nice come-from behind victory. Its clear that the Classics tried to get a result every night with the load of talent they carry. Even though they dropped a close encounter, they still had a second match to finish off on a lighter note. The Orient had to expect a quick response, but didn’t appear to be ready in order to slow down a more determined side. The Classics came out with a vengeance owning a strong first period thanks to the Kakivelis brothers leading the charge. The siblings combined for the three goals on brilliant plays that stifled the Orient defense. Despite being down by a pair, the Orient were given a great five on three opportunity to pull themselves back in the game. Unfortunately, they couldn’t get much going with S.Morante denying every shot his way. M.Mavroudis would eventually create a bigger gap with the man advantage right before P.Karvouriaris collected his third point to seal the win.

The Country Club got started right away to get their offense going giving no time for the HC Jokerit to realise what had hit them. The game was already out of reach after the first period with the Country Club riding a 6-0 lead. F.Proulx was heavily involved collecting four points that included two goals, and M.Dupuis had no issues denying 14 shots to preserve a shutout. It showed that the Country were ready, and that the HC Jokerit played with less urgency. That mind set could have changed in the second game, but the HC Jokerit weren’t able to adjust as they found themselves in the same situation. This time, the fell behind 4-0 after one period, but were finally able to get there offense going. A.Amaral scored twice in the final frame to help narrow the gap within striking distance where all of a sudden the HC Jokerit had life trailing only 4-3.Unable to ride their momentum however, M.Dalpe spoiled the party notching his second to provide a two goal cushion with less than three minutes remaining. No doubt it was a difficult night for the HC Jokerit, who looked a little off and unprepared for a good portion of the night. The Country Club played it right-from the get go playing a near perfect two games except for a slight five minute hic up where they gave up three quick goals.

Falling behind 3-0 after three minutes isn’t the best way to resolve your struggles. The Degenerates needed to ride a strong start in order to try and get back to their winning ways but things only got worse falling 5-0 at one point. The RCGT Knights simply out worked their opponent by going to the net where five different players scored. Knowing that this contest was pretty much put to rest, the Degenerates wanted to try and finish stronger in order to set good habits in the ensuing match. They did manage a way better second period bagging four goals to make the final result look respectable. However, that still didn’t settle well for a team that’s searching for a victory. The second game was a lot closer with both sides trading chances that saw their net minders very busy. The one key advantage that the RCGT Knights carried was that they kept playing with the lead. At no point did the Degenerates ever play in front, but they did battle back every time to even the score which eventually sent this contest to a shootout. S.Tessier was clearly a big difference maker scoring three out of his clubs four goals along with the shootout winner.

The SalumiVino player of the night goes to Peter Abandonato of the Kings. Playing in his first two games with the Kings, P.Abandonato made a good team that much better producing an impressive eight points.