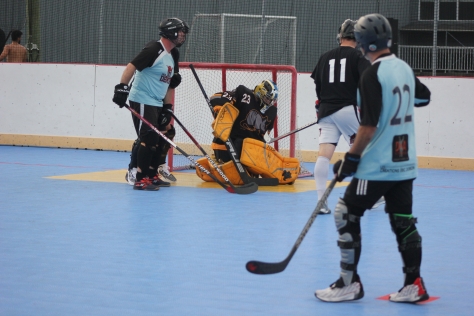 Brewers rebound after falling apart in a 10 second span

The Fatal Demons pulled off something out of nothing in their first encounter with the Brewers scoring twice in only ten seconds to gain a slight 3-2 lead. That turn of events occurred with five minutes left in the game where the Fatal Demons were able to fend off some late pressure by the Brewers. D.Verta attempted three slap shots that kept hitting M.Chenier, who looked sharper than most goaltenders. Despite the cruel ending, the Brewers demonstrated some strong character in the next game where they really took it to the Fatal Demons. A.Lanni just came off a two goal performance and wasn’t done yet as the leader snapped a 1-1 tie before feeding D.Verta for a two goal cushion. From –there, the Brewers played with more purpose than what their opponent were showing. G.Vouloumanos used a big second period tally, and the Brewers went on cruise control grabbing an important win.

C.Stroubakis was impenetrable when it counted in the second game, and the Assadi Consulting Inc took a pair of close encounters with the RCGT Knights. Unlike the first game, C.Stroubakis was supported by a better defensive display that led to a 15 save shutout. Both sides played two completely different styles in that one hour. The Assadi Consulting Inc and the RCGT Knights decided to take high end chances that resulted in a 5-5 draw before N.Kokovidis decided matters with the lone shootout marker. It was clear-from then on that the two teams decided to tighten the bolts a little harder in the ensuing match. The game was ultimately decided on the special teams. The RCGT Knights had the chance to break the ice when awarded a power play by the mid way point of the final frame, but were unable to capitalise with the man advantage. That missed opportunity came to bite them in the end as they took a penalty shortly after to put the Assadi Consulting Inc in the drivers seat. It was almost certain that their specific four man unit was going to make something happen. J.Courteau wasted barely any time to strike and put his club ahead after getting set up on a quick play stemming-from J.Rochon and M.DoCouto.

Fatal Demons got the split they wanted with Armos

After playing earlier on in muggy conditions, the Fatal Demons had a difficult challenge ahead of them going up against a fresher and well rested Armos team. Knowing this however, the Fatal Demons played it very smart by conserving their energy and only using it when needed. All they needed to do was to defend and break up plays which would eventually generate into some scoring chances. Most of their tallies came-from setting up shots that on the large part found their way through. G.DeMarinis led that category riffling a hat trick, but perhaps the biggest goal of this contest came very late when F.Casacalenda fired one with only a minute left in the game. That win forced the Armos to regroup and get their act together. Despite falling behind early, the Armos started to show their legs as the game went on. S.Marricco used a late first period goal to provide a 3-1 lead, and both teams knew-from that point on where this match was headed. The Fatal Demons just couldn’t keep up in that last stretch due to fatigue while the Armos kept pushing making sure they banked three points to the standings.

The SalumiVino player of the night goes to Anthony Lanni of the Brewers. After dropping a close 3-2 encounter where he notched both tallies , the captain regrouped his players, and led by example again by producing three more points to capture a big win.