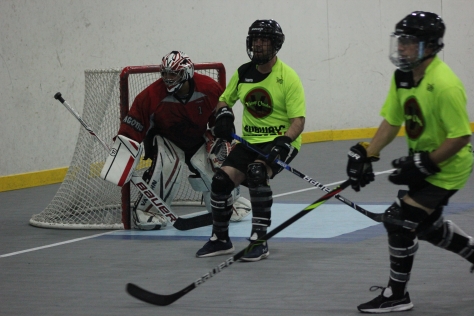 Classics use lead to their advantage

M.Destounis broke a scoreless tie, P.Assadi made 10 saves for a shutout, and the Classics hung on to beat Les Immigrant in the first contest. The Classics knew they were going up a desperate club. Even though they sit in a playoff spot, Les Immigrant would have loved nothing more than to at least get a split. Unfortunately, the second game didn’t go there way either despite getting on board twice. It was the same player that came to haunt Les Immigrant with M.Destounis striking first while setting up two teammates. Les Immigrant never had the luxury to play with the lead, something that’s difficult to do versus a stingy club. Their lone tallies came from a reliable source in A.Addante.

(1)The Classics vs Les Immigrant(0)

(2)Les Immigrant vs The Classics(4)

Orient settle the score in shootout after dropping opener to Punishers

The Punishers were all but 40 seconds away from claiming two clean wins over the Orient. After taking the opening contest by a 3-1 margin, the Punishers couldn’t hold up long enough, and in the end had to settle for a shootout loss. It was only fitting that M.Morin would come through and rescue the Orient. Morin scored twice, collected an assist before bagging the lone shootout marker. The Punishers got offensive contributions from pretty much everyone in these two games rather than relying on their key guys.

Degenerates slip out a pair of character wins over Excalibur

It certainly wasn’t easy, but the Degenerates took both their games versus their rival on Monday night. Both games required quite a bit of resilience on the Degenerates side, something that’s been asked of them all season. The first game was decided fairly late when D.Charbonneau broke a 2-2 tie. The Degenerates knew the second match was going to be that much more difficult. However, they did manage to play in front which clearly gave them an advantage. G.Santacroce made his effort pay off as the young talent scored early in the second period to snap a 1-1 tie. The Excalibur once again fell behind and unfortunately saw their deficit grow larger when L.Folini struck minutes later. That was Folini’s second of three points during the match with his third point being part of an empty net marker.

Fatigue not an issue for Punishers in double header night

The Punishers were faced with a difficult path ahead of them on Monday night. A tough back to back stretch starting with the Orient, and followed by a matchup with a very familiar opponent in the LG HC, somehow fatigue didn’t play a role as they managed to prevail on both occasions. It was clear they competed in both games beating the LG HC by three goals in each of the encounters. Despite the challenges they faced, the Punishers showed their true nature by fighting through and controlling both matches. The first win resembled their previous result versus the Orient that saw scoring efforts coming from different players. Then, the sleeping giant woke up, and C.Gingras took over like he’s done many times before.  Gingras scored a first period hat trick before adding his fourth tally to cap off a very productive night for his team and for himself.

The SalumiVino player of the night goes to  Marino Destounis of the Classics. After potting the lone winner in the first contest versus Les Immigrant, Destounis wasn’t done yet, adding three straight points to help lead his club to a second straight win.