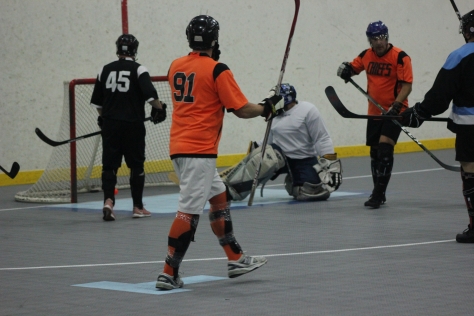 Having to play with no changes was the Family’s undoing on Friday night. However, things only started to go sour for the Family by the third period where the Chiefs finally connected to gain control of the match. Perhaps the biggest moment occurred when E.Capalbo snapped a hard low wrist shot to beat M.Freda. That that tally came in a shorthanded situation to put the Chiefs up by two. You never want to give up an unfortunate bounce, but the Family didn’t dwell on it knowing they put up a great challenge. M.Braun and M-A Daaha each scored twice in the loss while the Chiefs got scoring contributions-from six different players.

In the latter minutes of the third period, J.Constantin did the unthinkable, netting three late goals in what was a dramatic finish for the Devil Dawgz. Putting it mildly, this was a crazy and wacky game between the two sides. Both teams were good at scoring but horrible when playing without the ball. It was one of those games that needed every single second in order to see who would pull through. Luckily enough for the Devil Dawgz, the bounces went there way. J.Constantin scored late in the first period before haunting the Bramabulls on three late markers that included the final dagger with less than five seconds remaining. Overall, just a lot of stuff going around with plenty of turning points. Definitely not a formula you want to use heading into the playoffs.

The Pylons came into Friday nights game with plenty of concern knowing that they had a 30 foot wall in front of them. They had to deal with only two changes ups while going up against an army. For most of the game however, the Pylons employed a plan that was tailor made to slow down their opponent. They nearly executed to perfection only to have an overtime goal make the difference in  the final result. The HBHA did dictate much of the pace by coming out hard to fore check the Pylons. One of their problems was that O.Caillet was occupying the net for the Pylons. The net minder was simply lights out frustrating the HBHA players throughout the entire night. Eventually, they did get their break when M.Pololos found himself at the right spot to bury his chance.

The SalumiVino player of the night goes to Joseph Constantin of the Devil Dawgz. Known more for his hard work and grit, J.Constantin surprised not only his teammates but himself as well by riffling three late goals to cap off a dramatic win for the Devil Dawgz.