high temperature Replica Watches UK baked paint, until now also applied to most of the movement table, this surface is the characteristics of the disk edge, the window position and the middle of the hole position of the hole has a sense of melting down, the formation of A slow slope, as if the molten liquid with its own gravity down, Replica Watches down, dry after the formation of the same effect, this Replica Roex Watches surface is generally very resistant to corrosion and very moisture-resistant, not easy to change color, to maintain a long time Bright colors.However, Replica Handbags uk these years in addition to the black side, but also rarely produced such a color face plate. Even if there are some color dial watch, the use is not the same process, to achieve this is not the effect. But also because of this, this type of Replica Handbags in the secondary market is very popular.
E Division semi finals 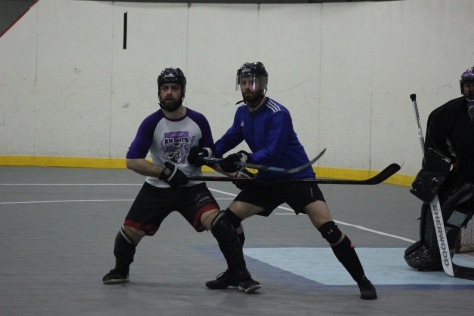 Horsemen fall short against a ready to play Fatal Demons

The Fatal Demons as expected came out hard and were not going to go down easy. They got the better start to the night scoring the games first two goals to put the Horsemen once again on their heels. The deficit was answered by the Horsemen, but it barely lasted with G.Amorosa and E.Medrano responding almost immediately. Playing-from behind proved to be very difficult in this series for the Horsemen against a side that doesn’t give much. They never had that opportunity to play in front to try and flip the pressure the other way. Instead, they were stuck chasing the two games trailing most of the time. Credit to the Fatal Demons for making it a point to start ready and getting that first goal. As much as the Horsemen attempted to battle back, either they were clogged by the Fatal Demons defensive game or denied by R.Ranieri standing firm between the pipes. Regardless the reasons, the better side prevailed in this one as it showed throughout most of the series.

The RCGT Knights couldn’t have asked for a better game. Many would have expected this to be a walk in the park for the Brew Crew, but that couldn’t be further -from the truth. Even with less than two full lines, the RCGT Knights played a great game, they led twice , defended incredibly well while getting the necessary goaltending-from S.Sauk. They most likely would have taken the deal of testing their luck in a shootout prior to the ball dropping if they had that choice. You just never know who will come out of a skills competition with so many variables involved. Unfortunately for the RCGT Knights, they couldn’t find a way to prevail during the breakaways. M.Maggiore and D.Verta showed their scoring touch in the shootouts for the Brew Crew while the RCGT Knights saw only T.Oliveira take care of business -from his end. If not for a small detail making the difference in this game, the RCGT Knights would have had a great chance to steal this series in a shorter game three. Sometimes it just comes down to one small detail or a particular moment that can shift the momentum either way. The Brew Crew were glad to avoid extending this series as they’ll need to focus on what is ahead of them.

The SalumiVino player of the night goes to Scott Sauk of the RCGT Knights. Facing over 40 shots is quite challenging for any goaltender. S.Sauk stopped nearly all of them which enabled his team to play in front for most of the night. If not for some little bad luck, the RCGT Knights could have potentially caused a major upset.

The E Thursday division is now down to its last two teams. The Brew Crew and the Fatal Demons will be facing off next week in a best of three series. Its safe to say that both teams resemble each other in many ways. Both have deep benches with loads of experience. No one really has an edge on who should come out on top. If there is one noticeable thing that stems back for the last couple of weeks, is that the Fatal Demons seem to be gelling more than the Brew Crew. However, that shouldn’t matter when considering what is at stake.